Donald Trump or Hilary Clinton for President?  Which would you prefer, and why?  In my opinion Donald Trump is who I would want to be elected.  Hillary has already had her time in the White House.  The fact that someone whom has already lived in the White House is so close to being there again, makes me question the whole system.  It seems to me that Hillary is proof that “who you are” and “who you know” counts for more than effectiveness.

Donald Trump has amassed billions of dollars and I do not think that he accomplished this by being lazy.  My impression of Donald Trump is that he is highly motivated and is someone with great pride.  Donald Trump has shown the ugly side of himself, however he has never showed one time that he is a coward or backs down from anyone.  Not backing down is a trait we need our next President to have or we will be headed in the same direction we are currently headed and that is not good.

One of my main reasons for not wanting Hillary to be elected over and above her “too big to fail persona” is the fact that she is supporting Obamacare.  If you do not understand why I am against Obamacare then you must not pay your insurance premiums.  Now I do not want to write about all the reasons I dislike Hillary but I would love to hear all the reasons why Hillary is better than Trump or vice versa.

Be the first to comment on "Donald Trump or Hillary Clinton" 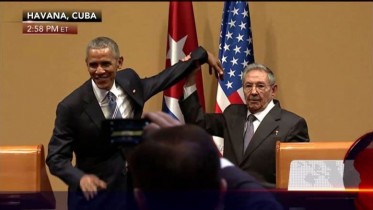 Check out Obama and His New Bestfriend

Check out this picture of President Obama in Cuba with Raul Castro.  Raul was raising Obama’s hand as though he was the winner of a…

Lenovo the Amazon of Computers

2016 Election how much does it matter?